Group A – The Big Five 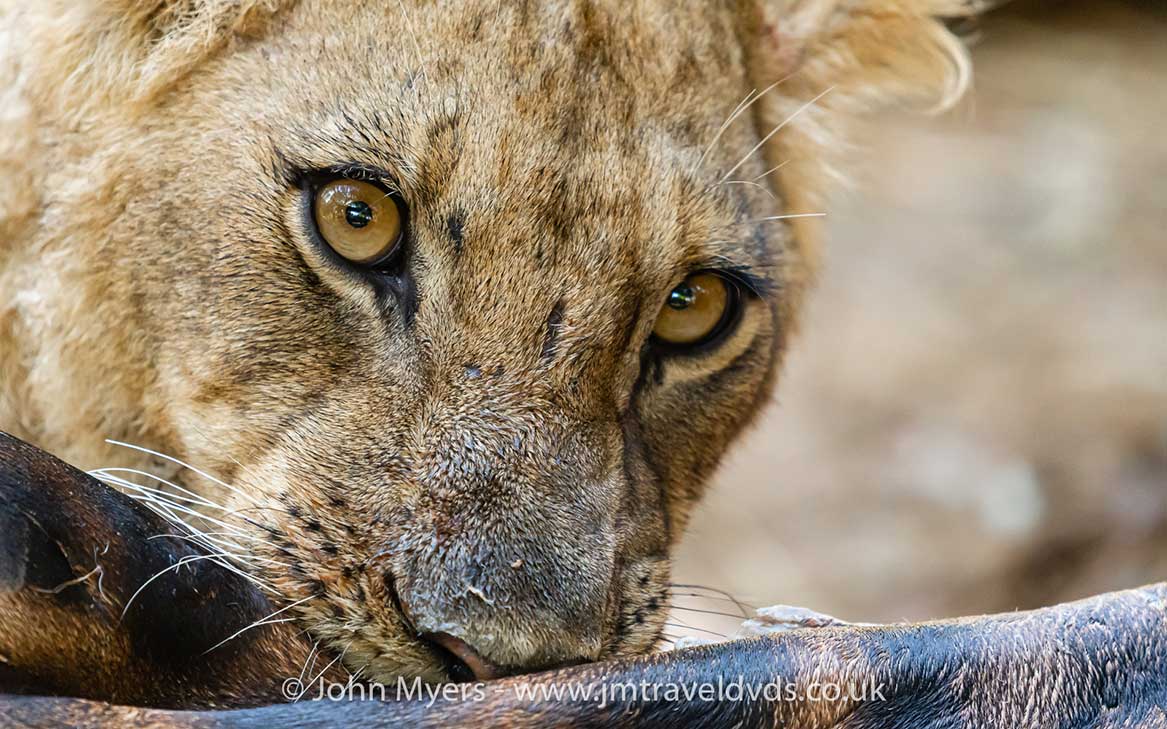 The leopard’s skin colour varies between individuals from pale yellowish to dark golden with dark spots grouped in rosettes. The pattern of rosettes is unique in each individual. Leopards are the smallest of the big cat group but are the most adaptable. They hunt, kill and feed quickly and quietly to avoid detection. Males are much bigger than females and can bring down a small giraffe. 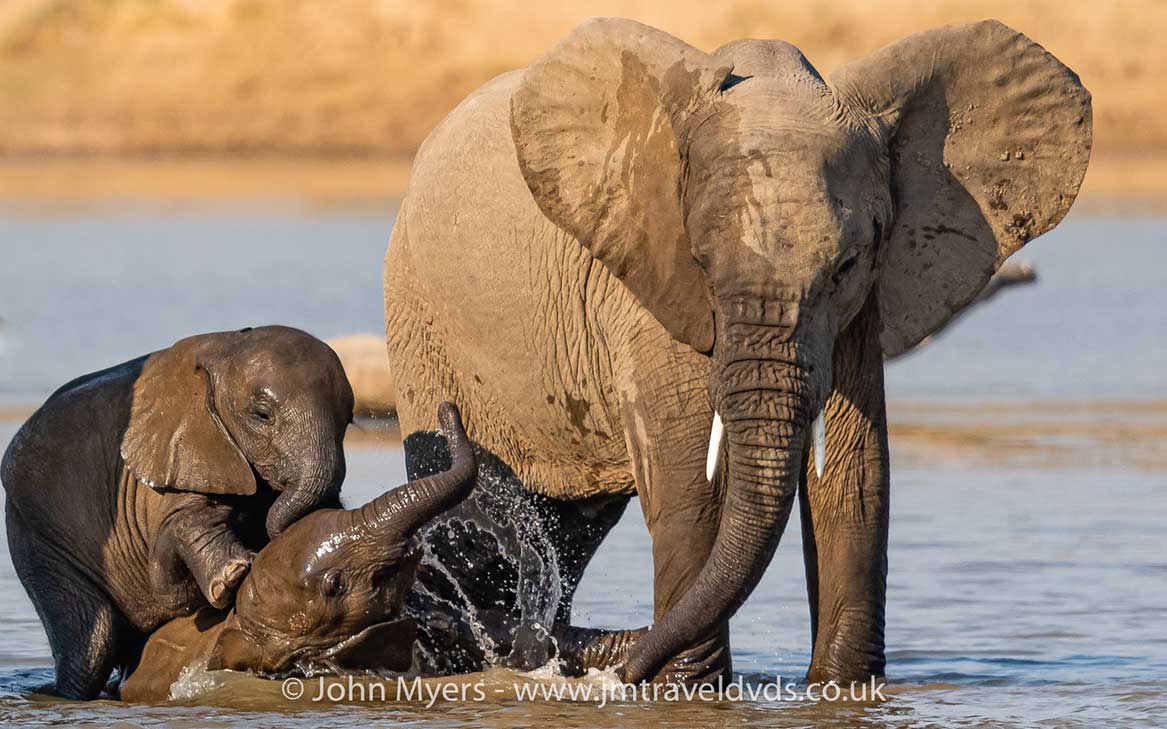 Baby elephants are well protected by the adult female members of the herd. While young, the baby elephants are vulnerable to lion and crocodile. The adult members usually attempt to hide the youngster in the middle of the group. These two are enjoying a splash and cooling off in the Luangwa river. 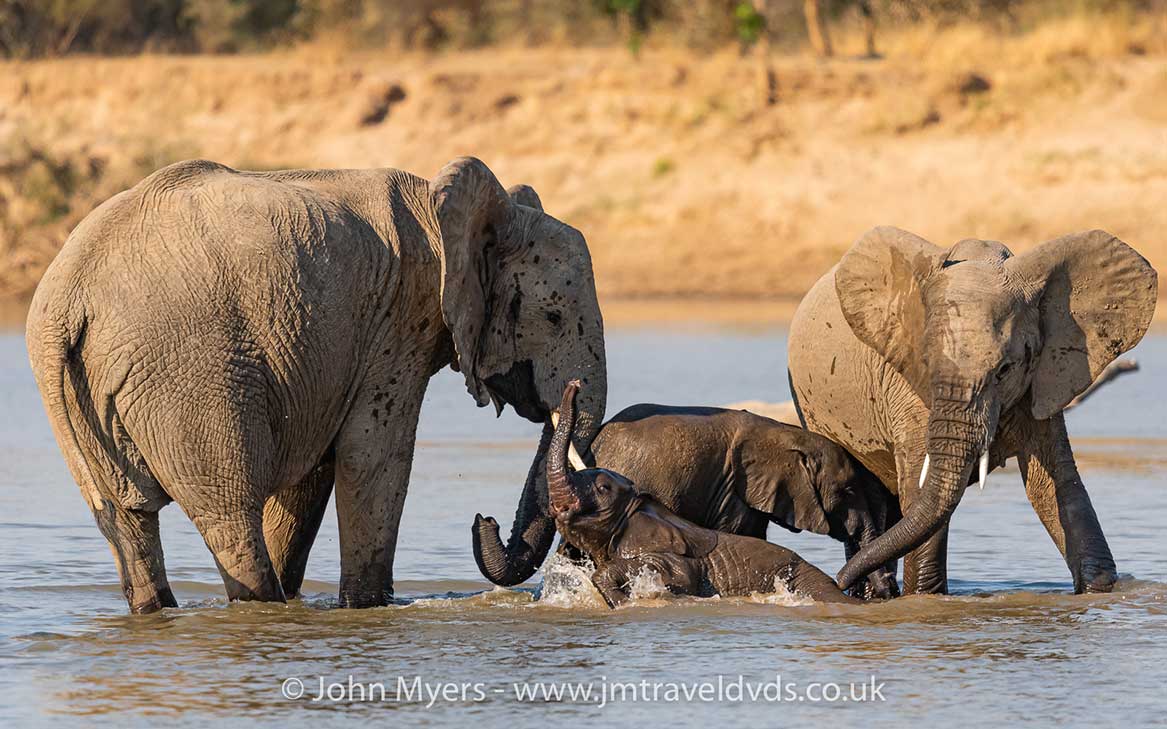 Elephants enjoy being in the water to cool down. Sometimes they like to throw water over each other. This can be regarded as a form of playing. 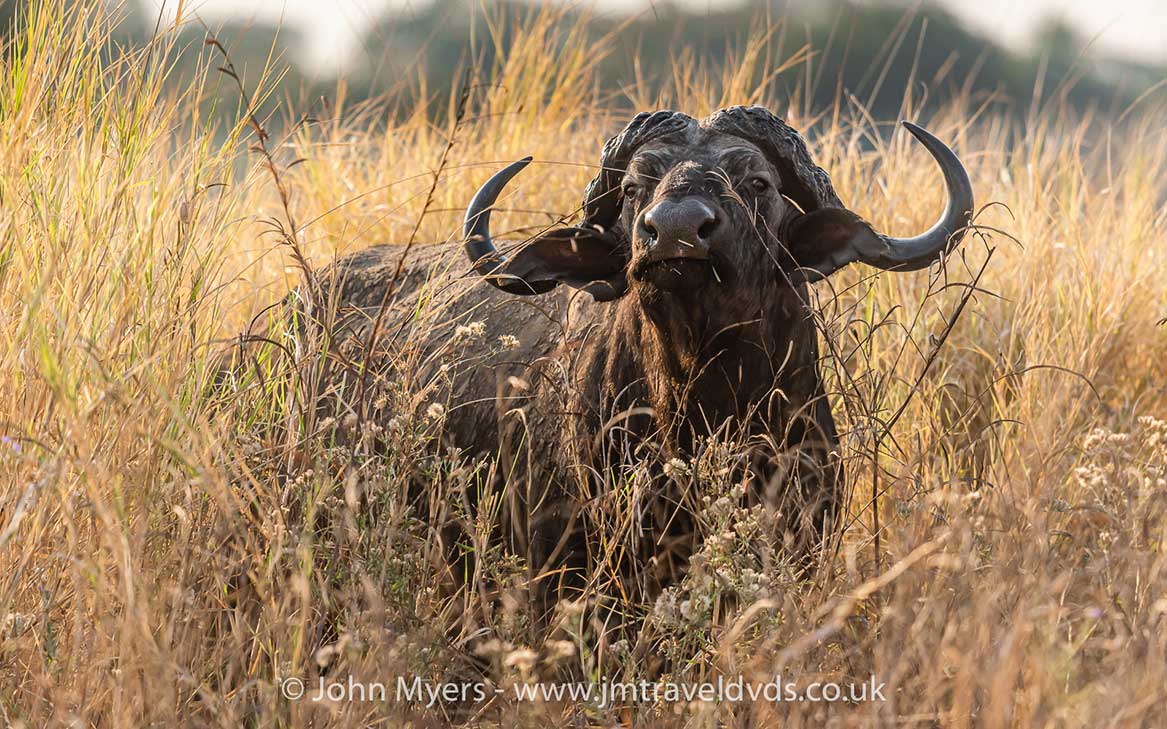 The Cape buffalo is the largest of the species found in East and Southern Africa. The adults horns form a continuous bone shield across the top of the head and is referred to as a boss. It is an extremely dangerous animal. No wonder it is one of the ‘Big Five’. 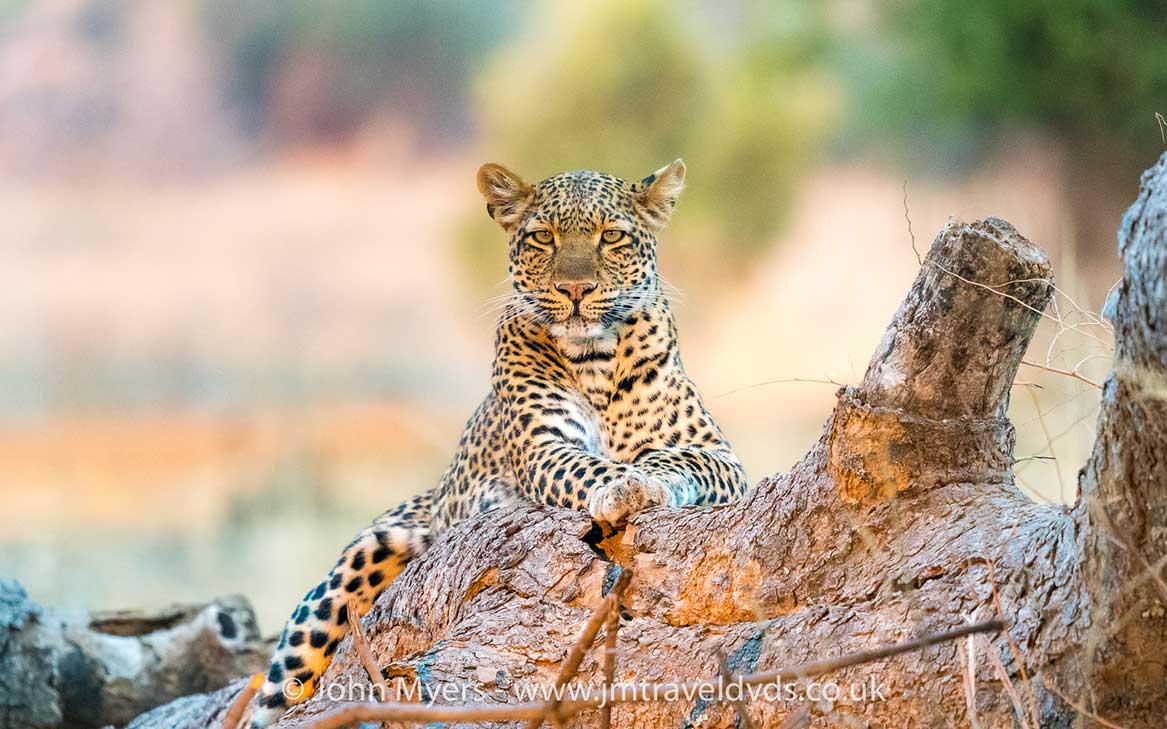 This female leopard, known as ‘Olimba’ is nicely positioned for a photograph in the early evening light. She is a well known leopard in the area. 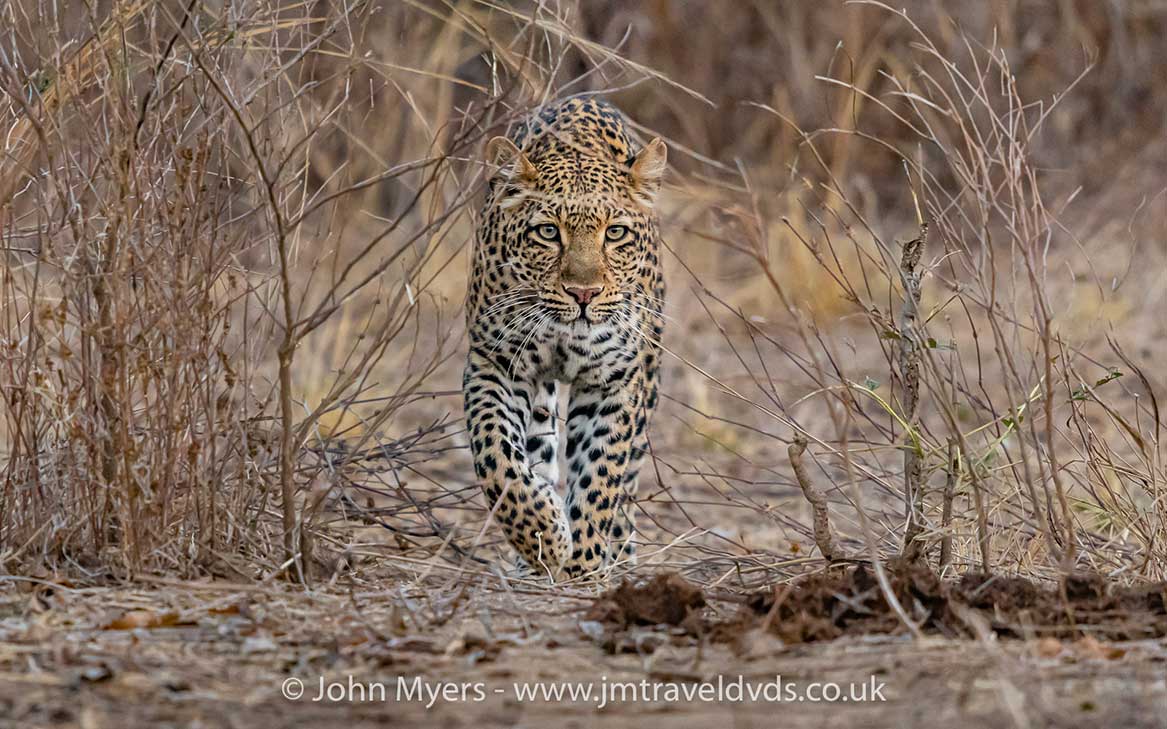 When leopards do hunt, they do so with stealth. They are superbly camouflaged, especially in the dry season, and can creep within a few metres of their unsuspecting quarry, before lunging, using powerful jaw muscles to exert a lethal hold. 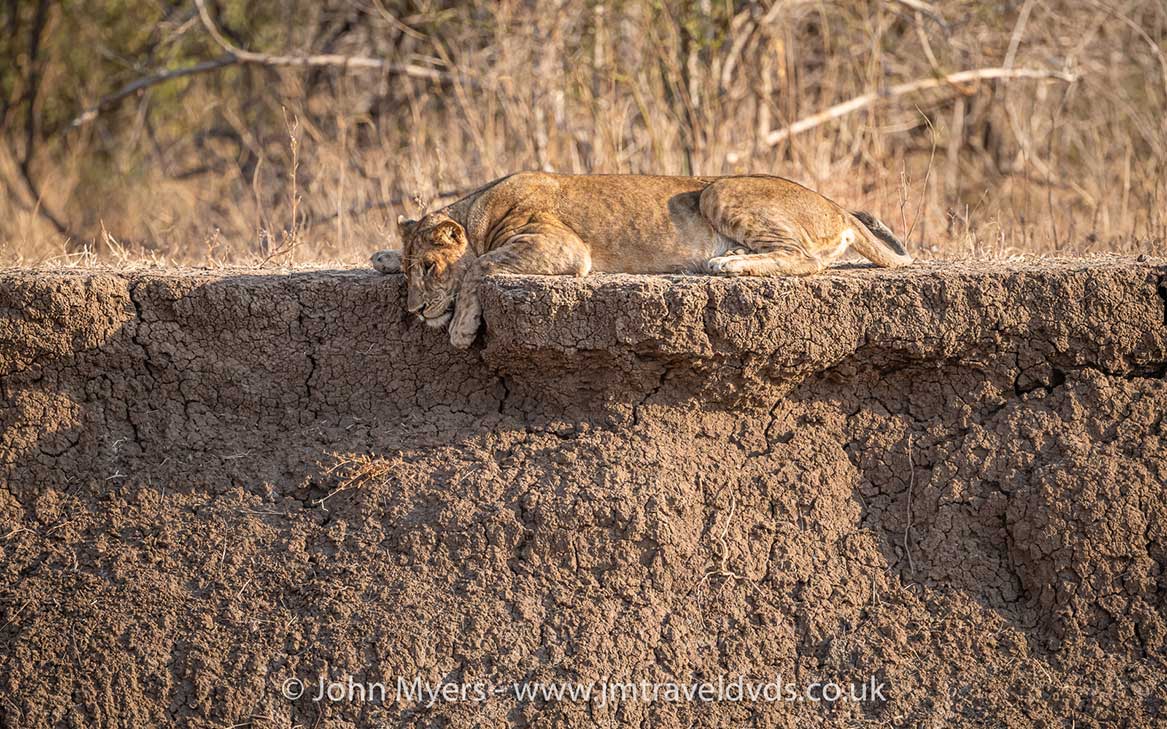 A lioness takes an afternoon siesta on the far bank of a tributary to the Luangwa river. 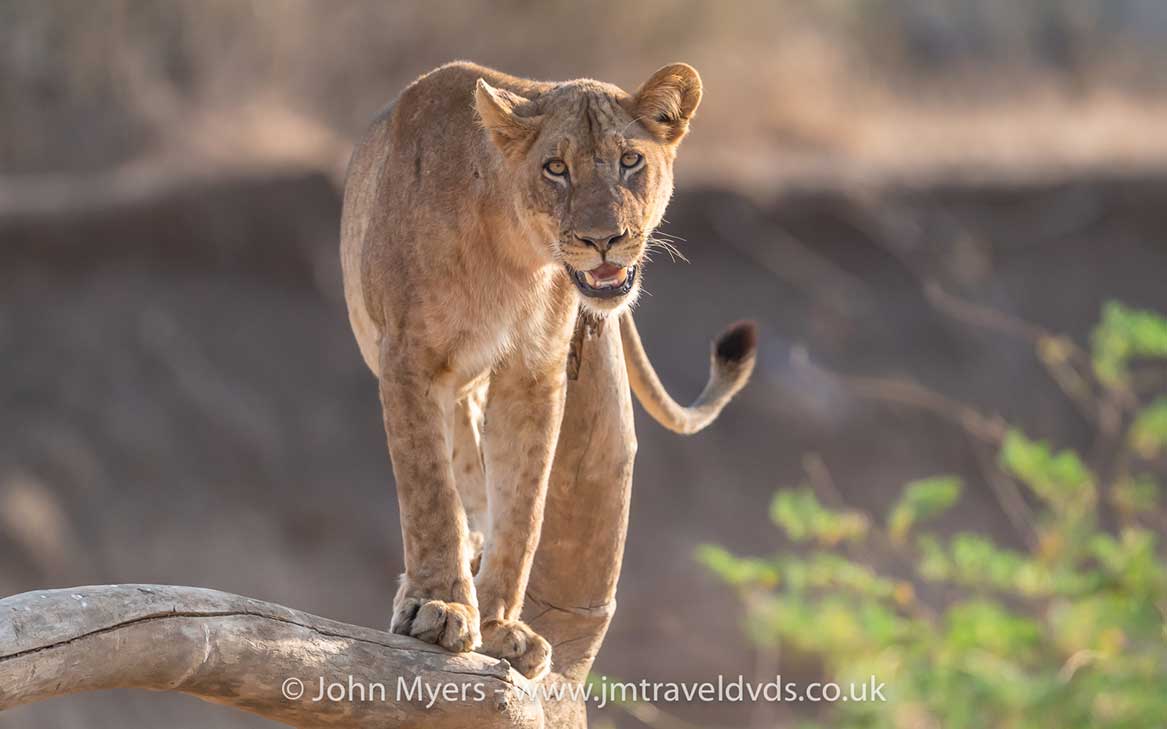 Lions are not as nimble at climbing trees or fallen logs as the leopards. But they will climb trees to escape the sweltering heat at ground level or to avoid insect bites whilst sleeping under the trees. 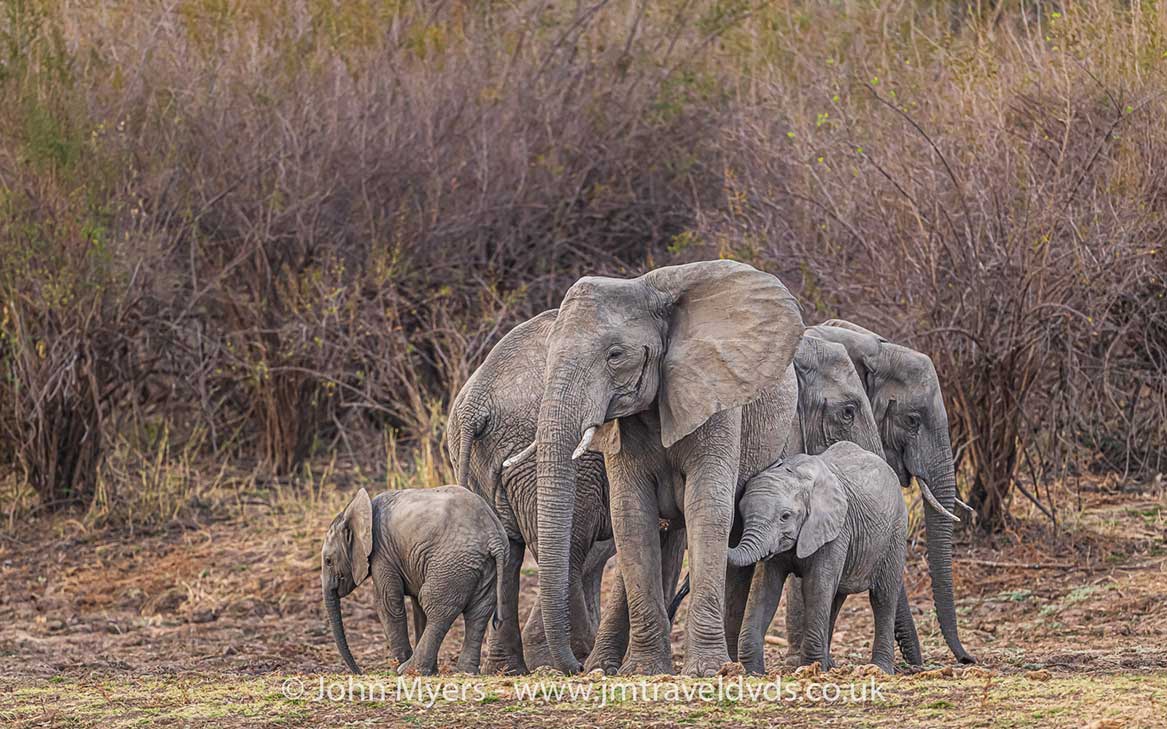 A small herd of African savannah elephants keep a watchful eye over their young. They are wary of the photographers sited not far way. Despite their size, elephants are pretty nimble and walk about twenty five kilometres a day – often more. They can certainly out run humans! 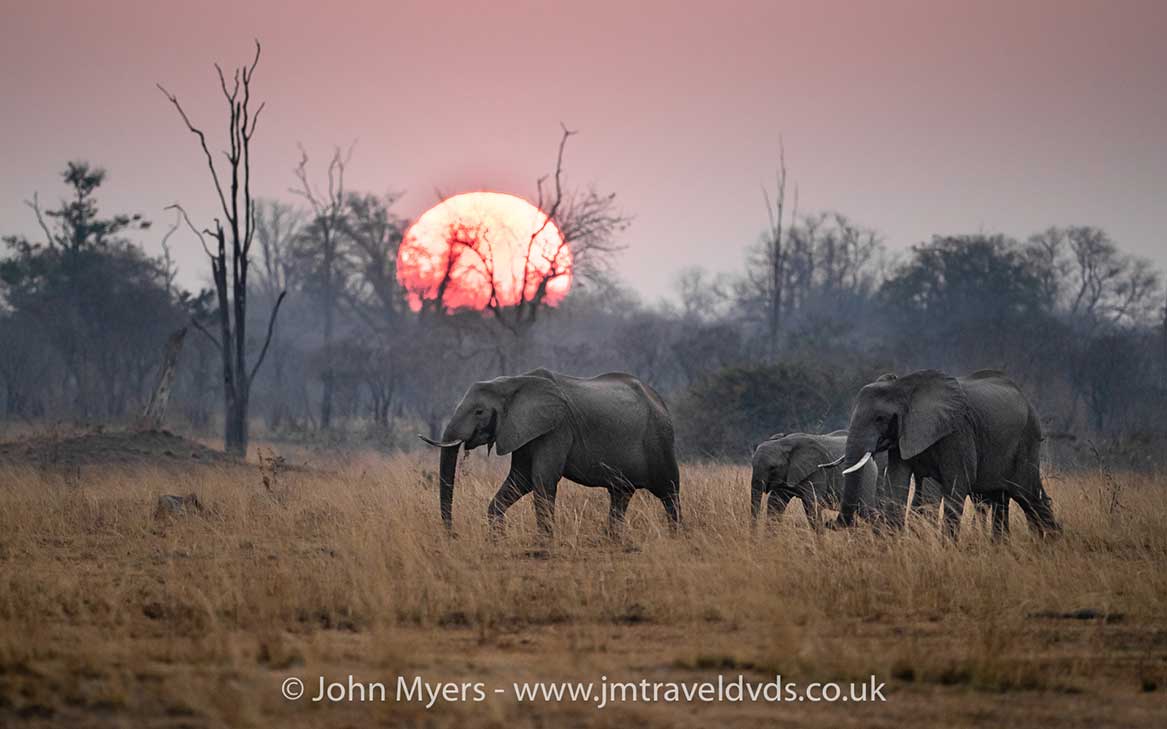 A lovely time of day to spot and photograph a small herd of elephants walking. They are probably on their way a lagoon or to the river to take in a morning drink. 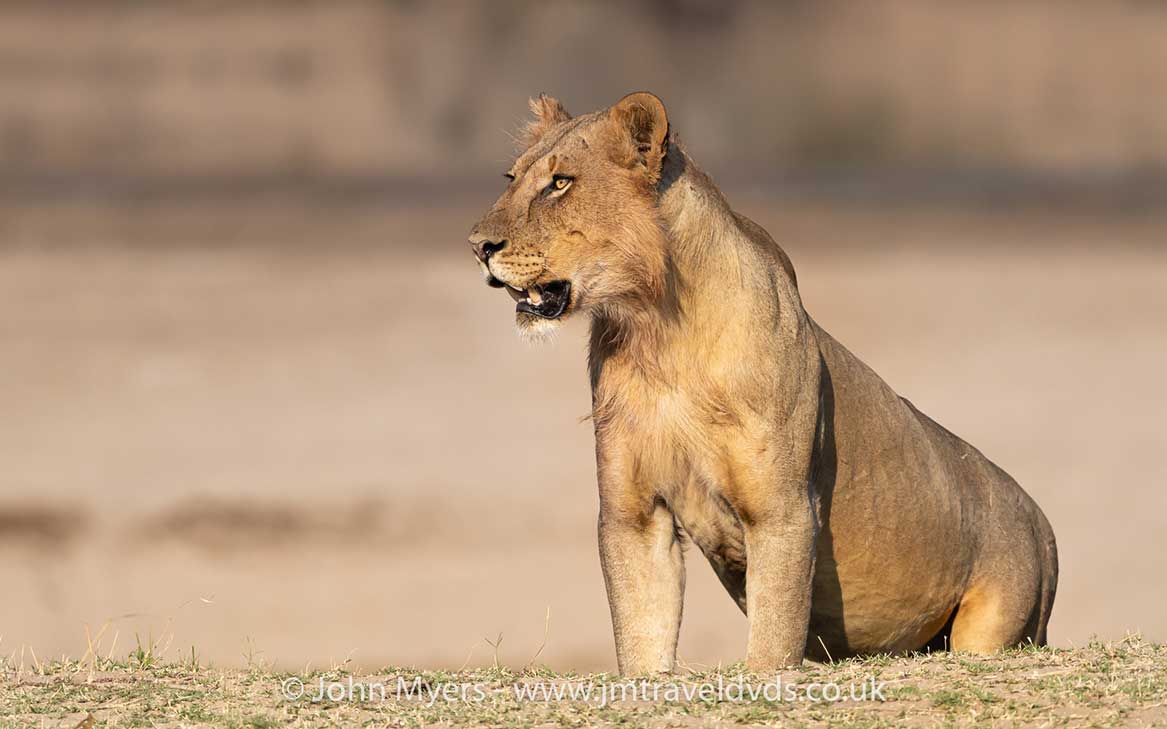 A lioness surveys the scene, always on the lookout for prey. They hunt with most members of the pride and usually start to get active again, after their afternoon slumber, just as the light begins to dim towards dusk. 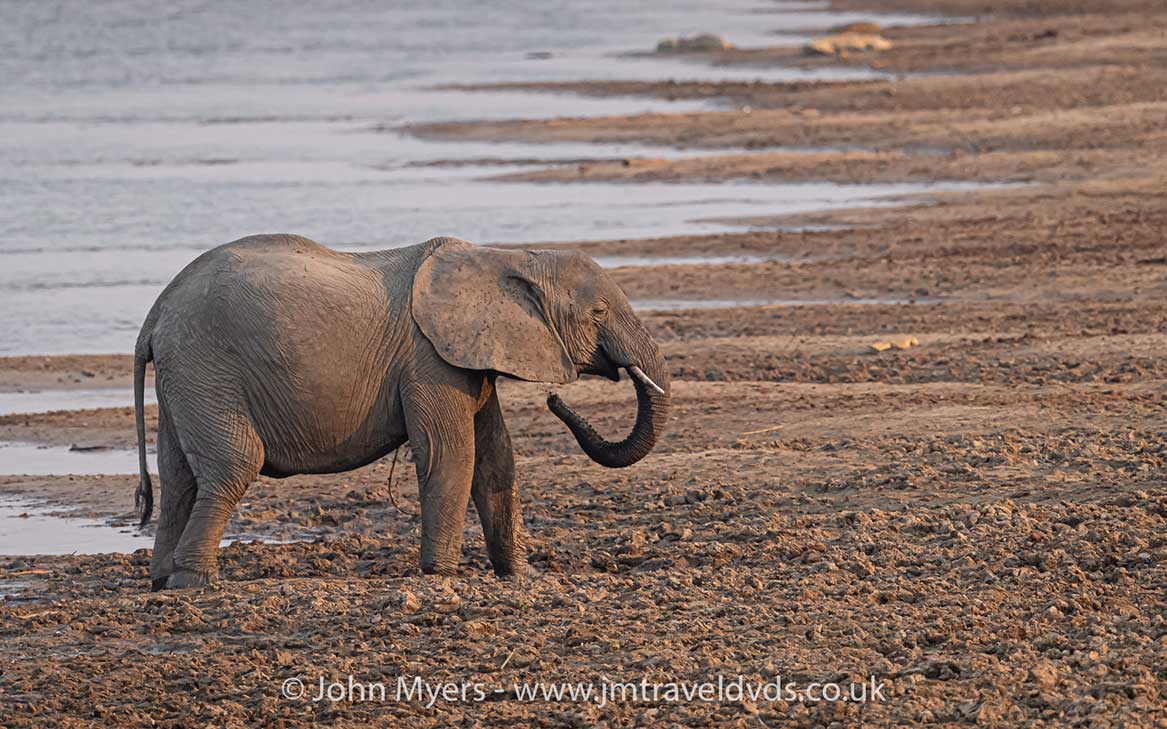 An elephant has just completed this session of drinking and will start to climb the bank of the river in search of more food. 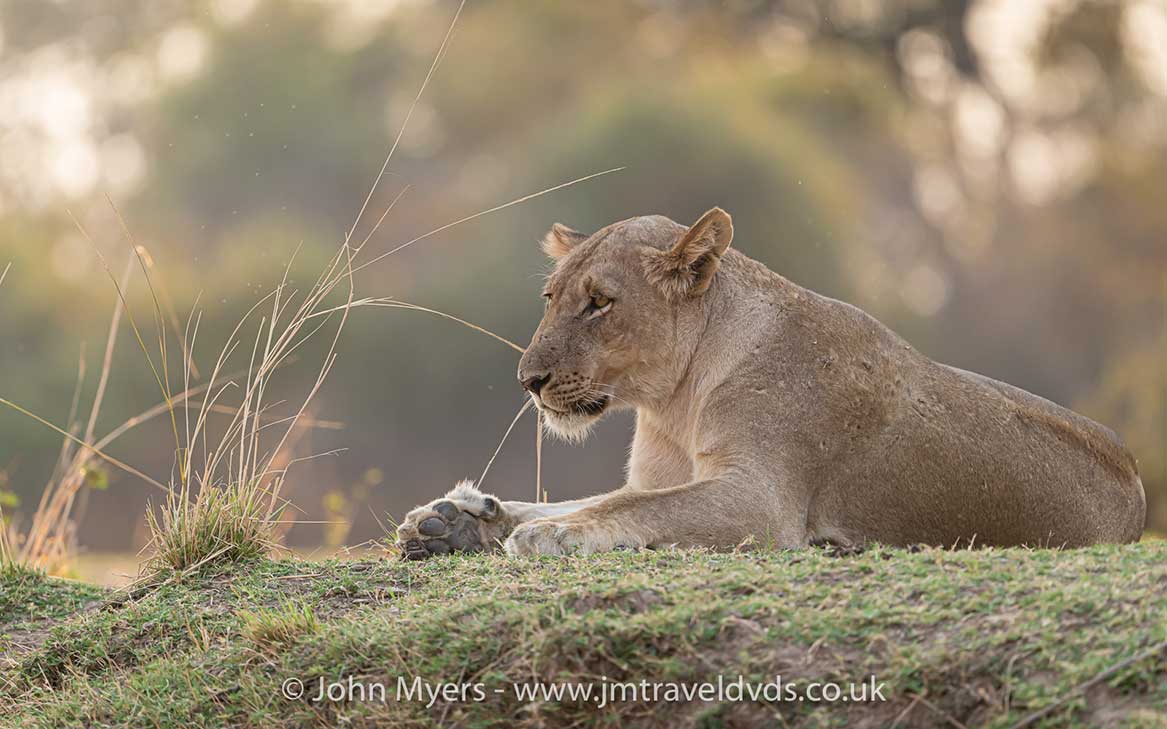 Typically, the lion inhabits grasslands and savannahs, but is absent in forests. Lion populations are untenable outside designated protected areas. Lions have been on the decline for awhile now. Although not fully understood, habitat loss and conflict with humans are the greatest causes of concern. 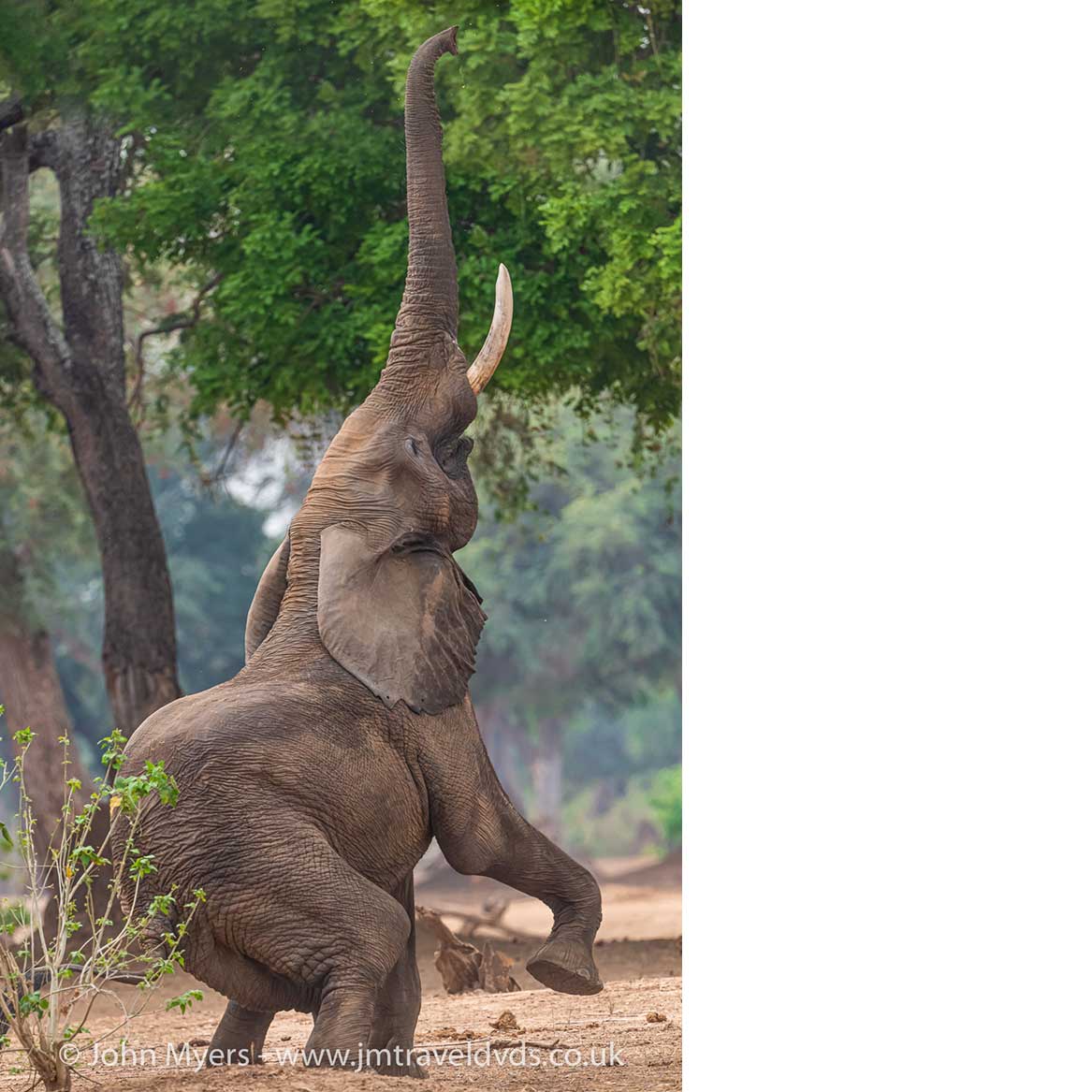 This hefty male elephant is determined to get the delicious winter thorn tree flowers that are in abundance in the Mana Pools National Park forest area. The flowers that fall daily to the ground have already been seized upon. 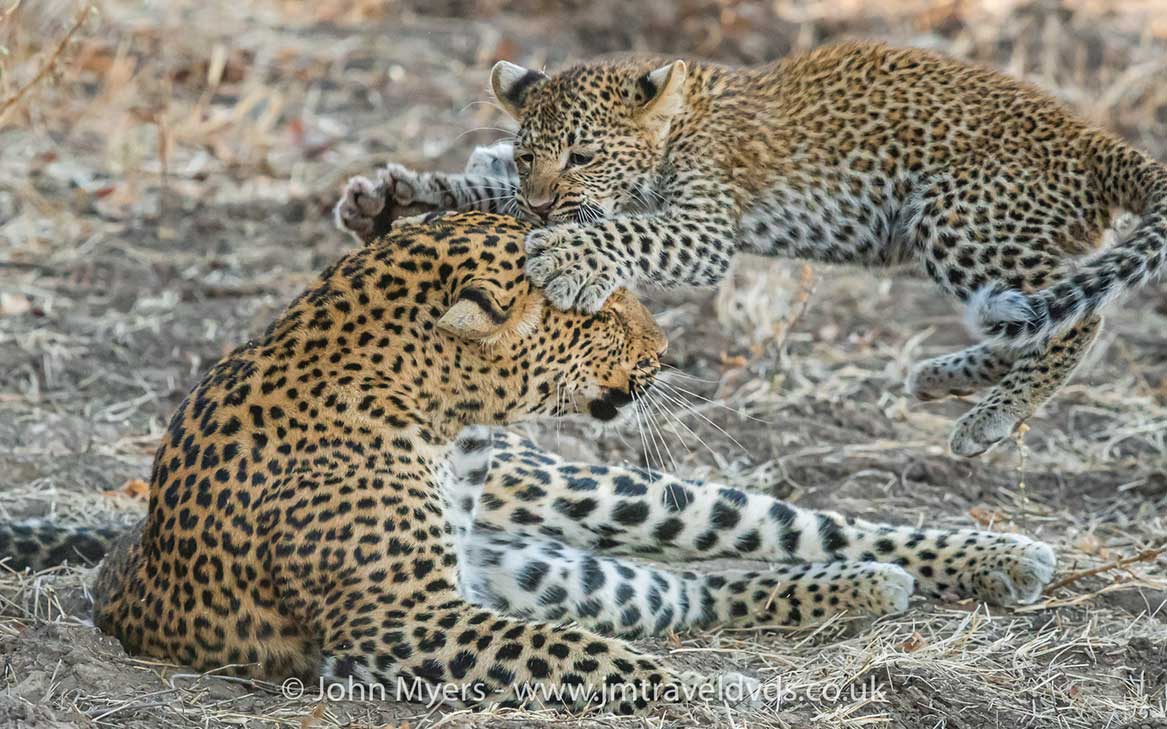 Previous to this reunion of mother with her cub, the adult leopard, known locally as Olimba, had hidden a freshly killed impala in a thicket and called to her cub to join her. The little cub crept cautiously across the open savannah to rejoin her mother. 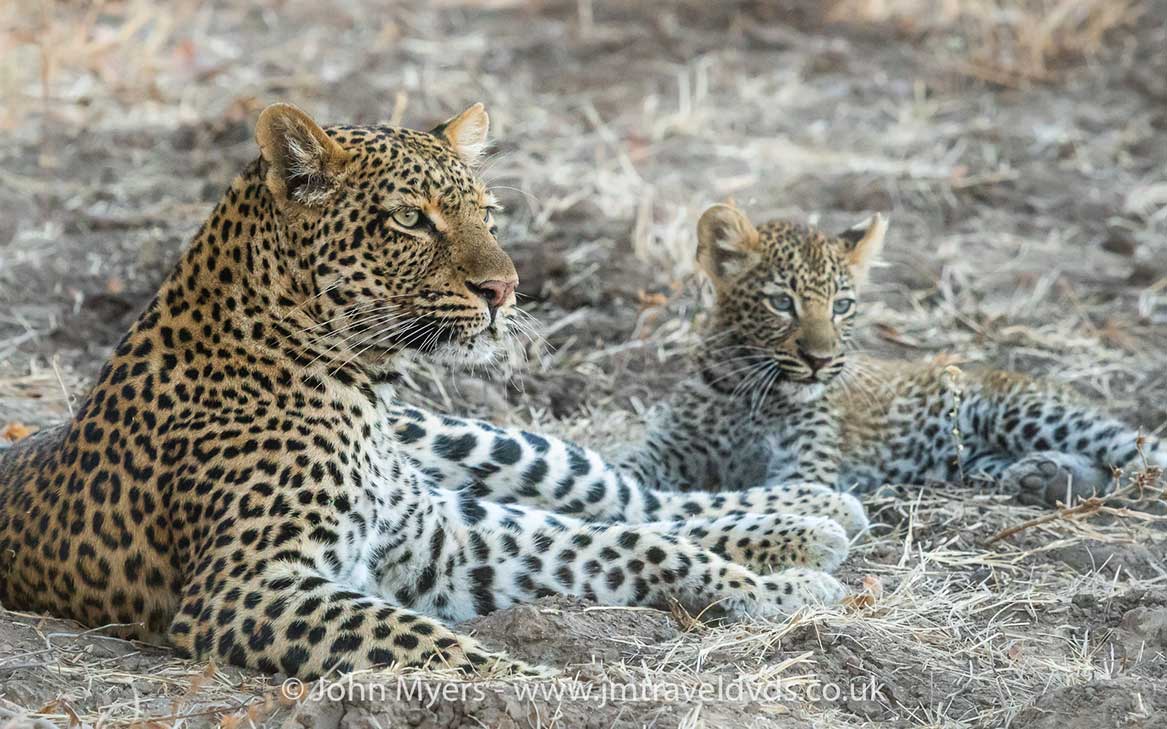 The female leopard and her cub take a rest in between bouts of play and sessions of eating the recently killed impala. 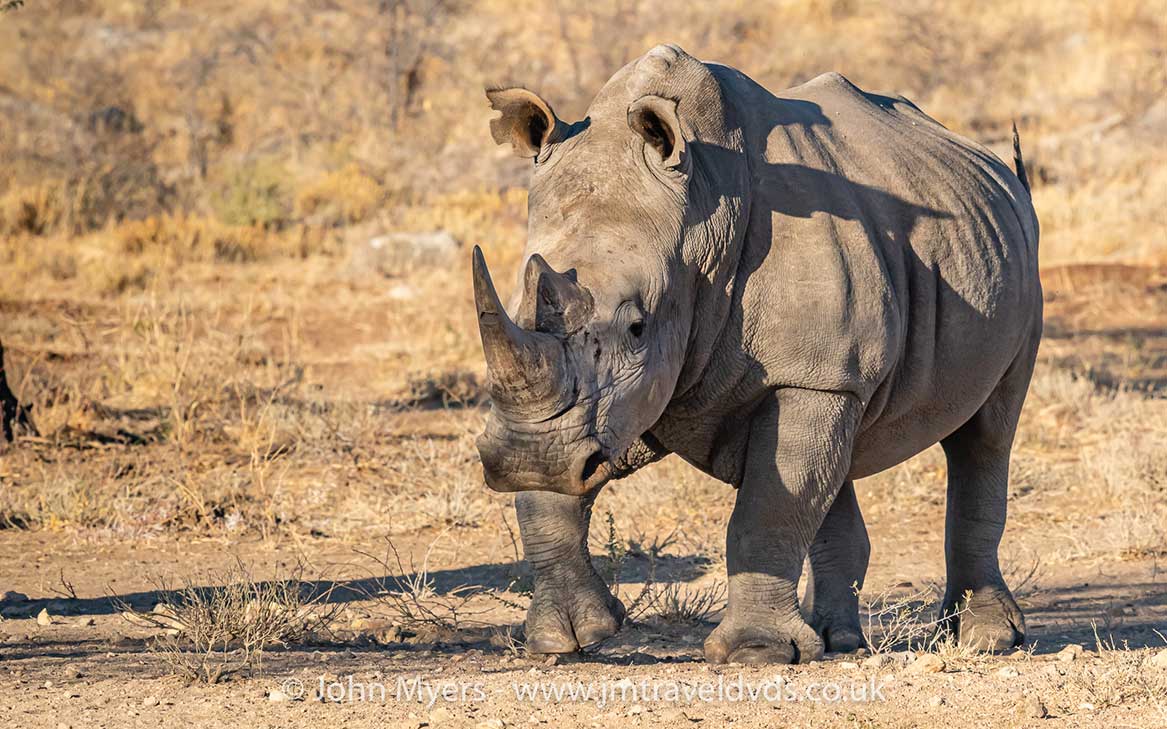 The white rhinoceros has a square jaw which is a distinguishing feature that marks it out from the black rhinoceros. It can commonly be seen in the Etosha National park in Namibia. It has a noticeable hump on the back of its neck. Each of the four stump feet have three toes. White rhino has this broad mouth which is used for grazing. The ears can move independently to pick up sounds. 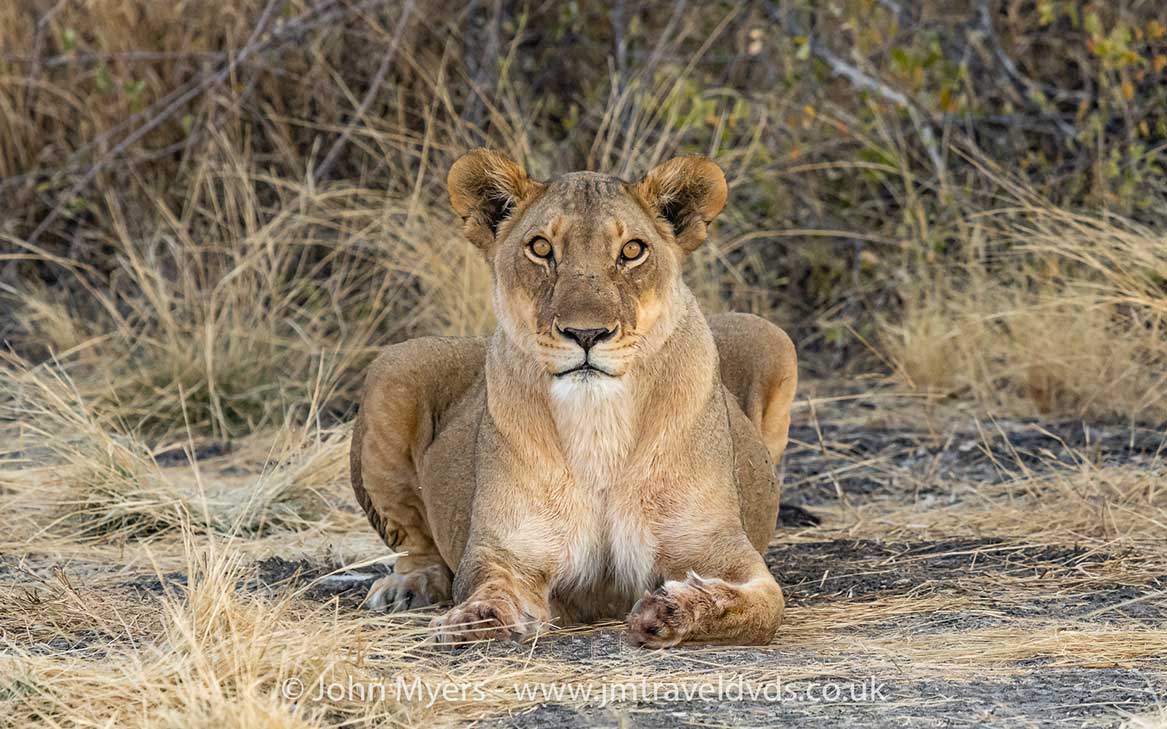 This lioness has all the time to sit and stare. She is resident in the Etosha National Park in Namibia which includes over twenty three thousand square kilometres of dedicated parkland. 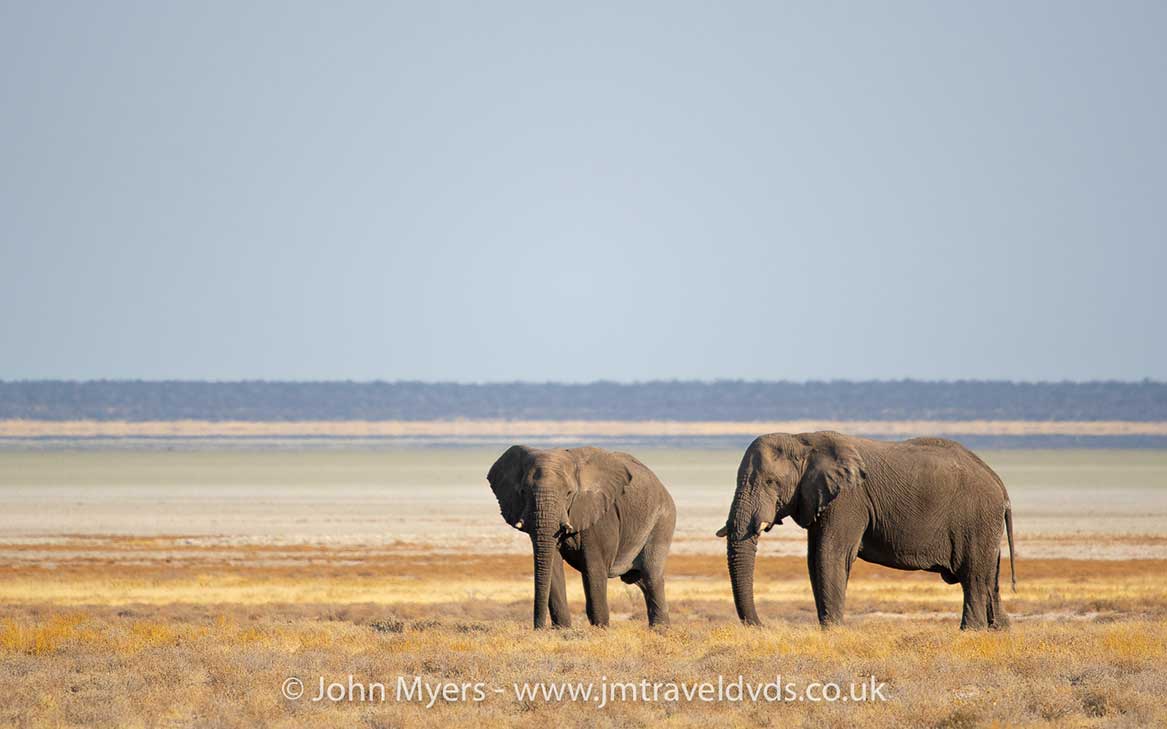 The Etosha Salt Pan is a one hundred and twenty kilometre long dry lakebed. The surrounding area is dense Mopani woodland, occupied by herds of elephants on the south side. These elephants drink at the surrounding waterholes. 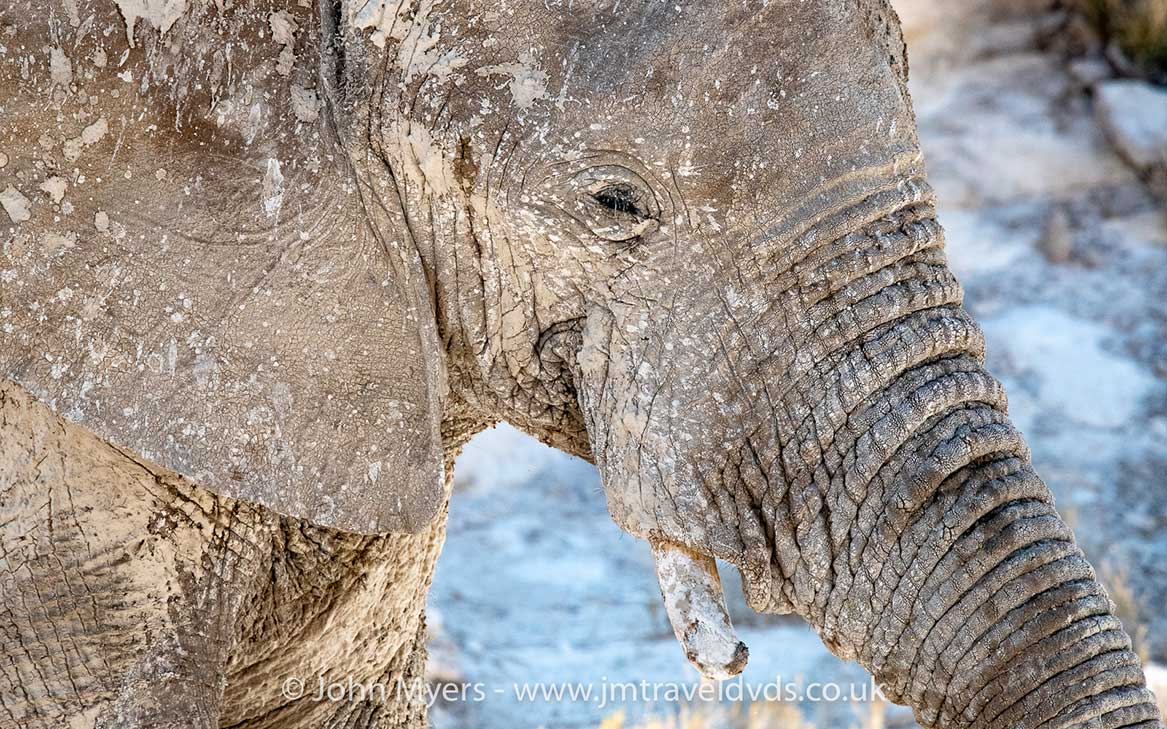 Having drunk from a waterhole, and they do this first on arrival, elephants will then usually stir the water up by wallowing in the muddy clay water. They then throw the white dust at themselves to further enable the cooling process. The result is photographed. 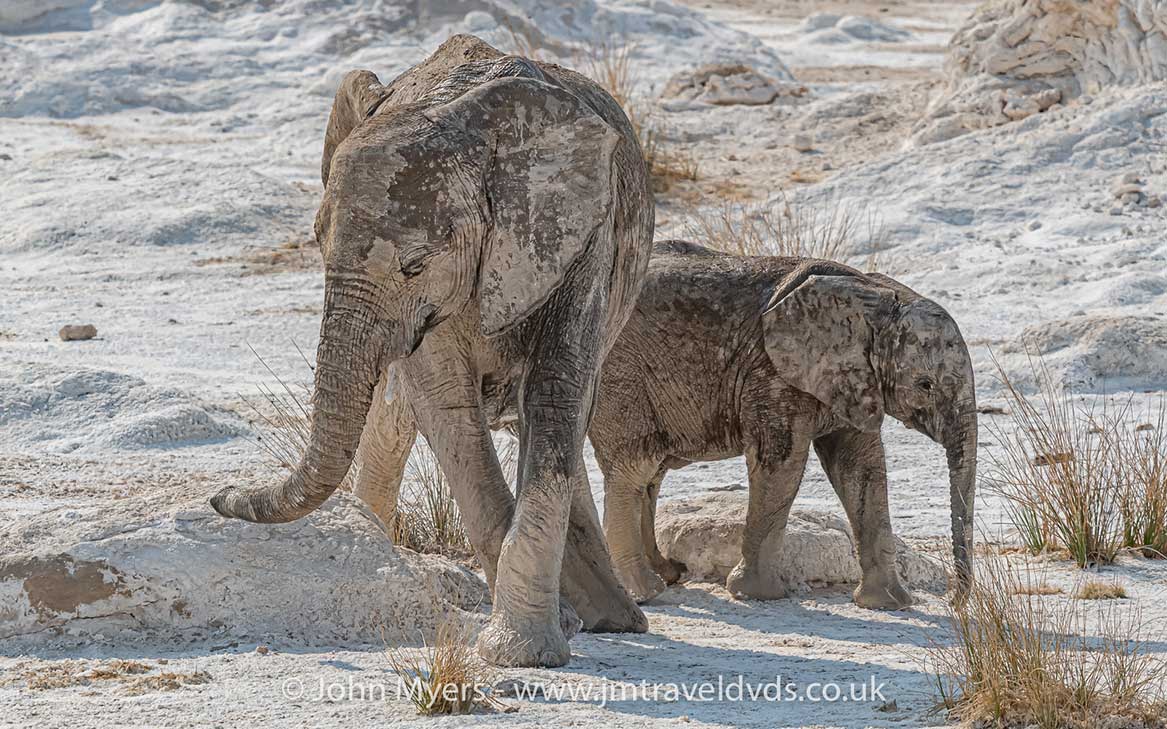 These two elephants have already drunk and played in the mud pools. They will slowly gather themselves and rejoin the herd for the long march back to the Mopani forests. 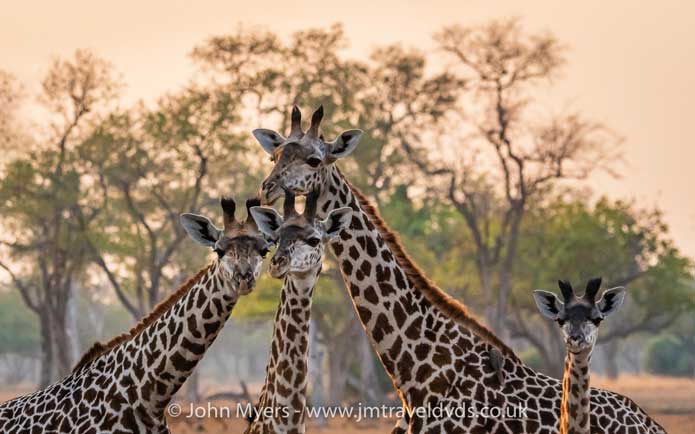 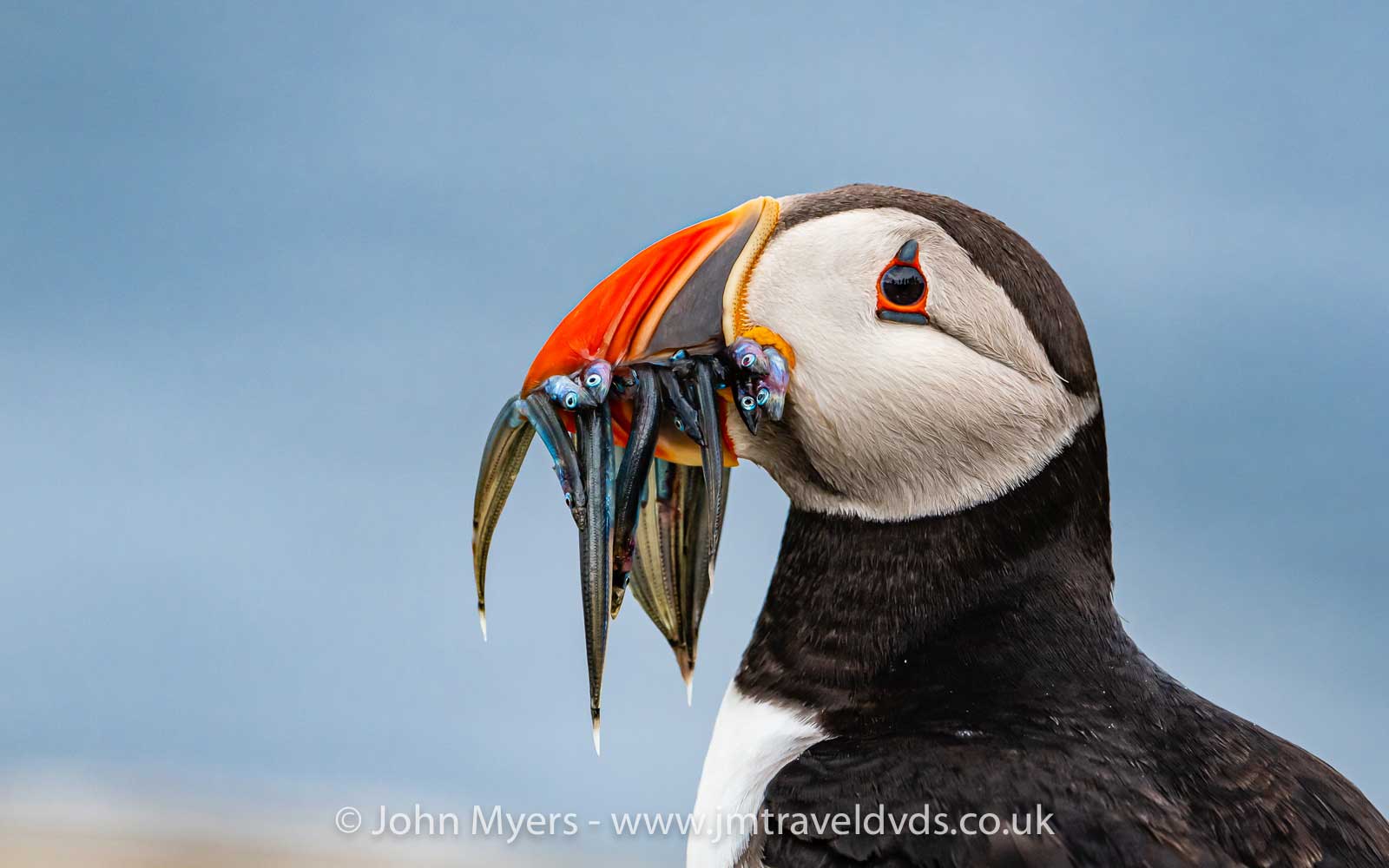 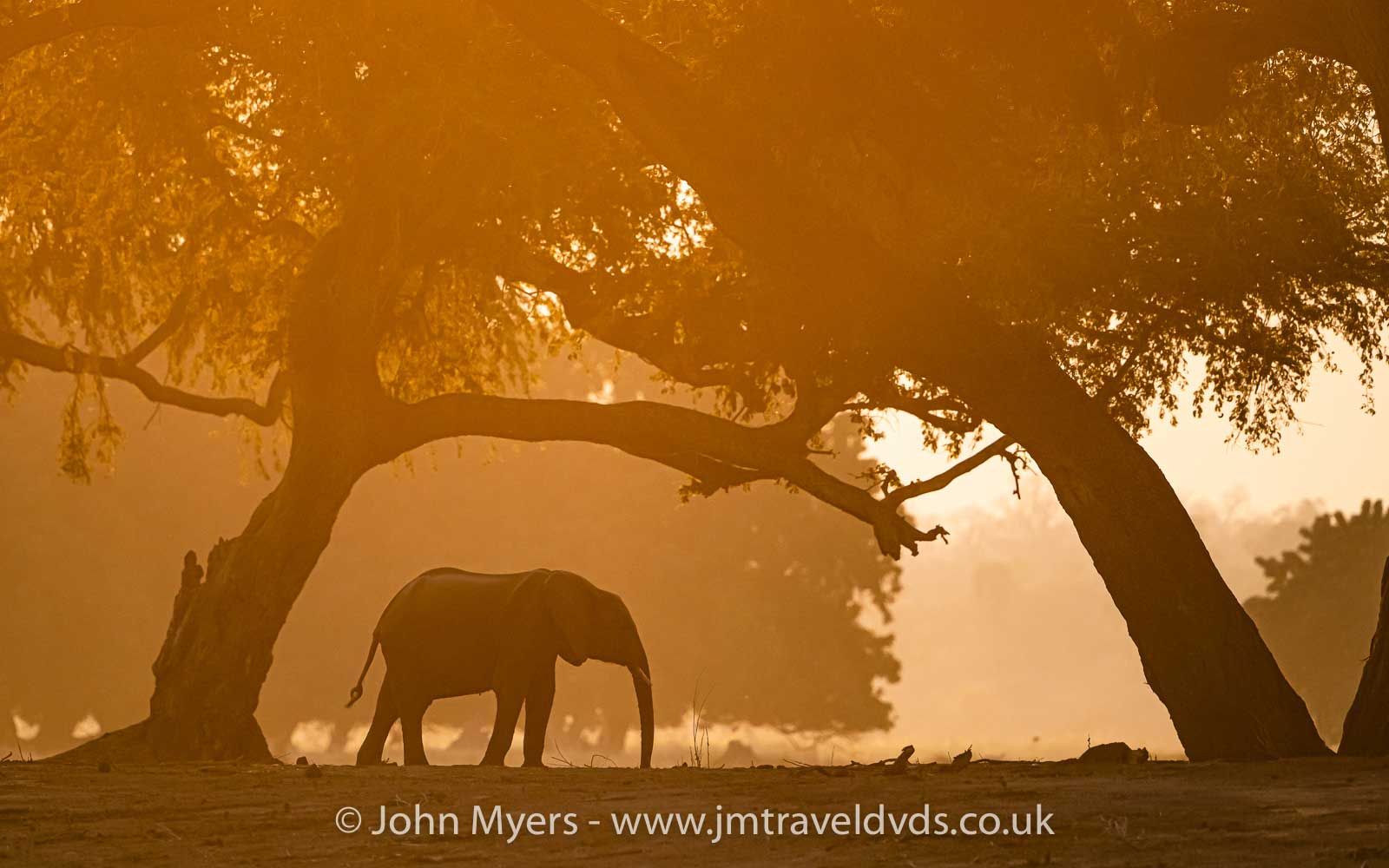